How a dragon god made the jellyfish lose its shell 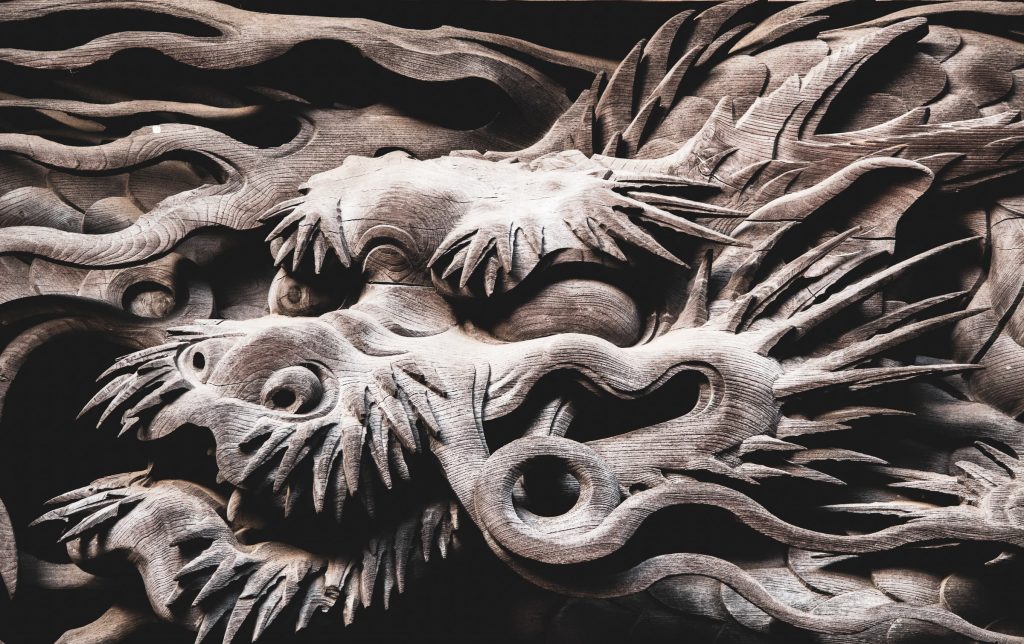 How the jellyfish lost its shell is one story of many about the dragon god Ryujin. Jellyfish are strange creatures. These days we know what they are and we know much about how they go about their lives, but imagine living in a time when everything new in your life was a good chance of being something nobody ever had seen before? That was food for legends, and that's how a dragon god made the jellyfish loose its shell.

A story behind the story

Imagine sailing the wide ocean and suddenly, the ocean is filled with gelatinous blobs. Very delicate creatures that would burst open onto contact and would turn into a flat blobby unmoving circle with a bunch of tentacles when taken out of the ocean. We know what they are, we know they have been existing for millions of years and that their success comes from numbers and the fact they can copy themselves. Some even revert back to a younger stage when injured. A good example is the Turritopsis Dohrnii. But just imagine being on that ship, sailing on top of a gelatinous mass, barely any water visible because of the sheer numbers.

One would have realized that it was some kind of animal as it could move when contracting its bell. After a fauna specialist of that age investigated the animal, it likely would have come to the conclusion that it indeed was an animal. But as all land-animals and most aquatic creatures one could have access to without the equipment to dive like we can today, they all had a skeleton. Some had either internal like us mammals, or an exoskeleton like many bugs and crustaceans for example. And here comes the boneless jellyfish…

The human mind and primitive instincts

Back in the days, like with many other things, the unknown was scary. It’s human nature to try and explain what we see. We may be at the top of the food chain, but there are still things out there that can harm us. Just look at yourself, I’m sure you came across a sound or a thing you couldn’t explain at first. Maybe curiosity takes over, But there is a good chance you felt at least somewhat uneasy. That is likely what happened with the jellyfish as well. The fact that some of them could sting like crazy made them a potential threat too, something that had to be explained. However, not having the scientific tools and knowledge we have today, legends would take shape. Surely there must be more going on with these weak bodies, yet harmful jellyfish…

This is where the Japanese dragon god Ryũjin, comes into play. The dragon god, also known as Owatatsumi in some traditions, is the dragon or water serpent god and tutelary deity of the ocean. This dragon god can change into different animal shapes and into a human shape, however, most of the time he is in his dragon form. He symbolizes the power of the ocean and is considered to be the good patron of Japan, providing rain for the agriculture of Japan, and food from the ocean.
It was good practice to stay on his good side, as monsoons and flooding could ruin your crop, or even rid you from your house. Naturally, seaman worshipped him too for successful fishing and calm seas.

Ryũjin supposedly controlled the tides with his magical shells and tide jewels from his palace under the ocean. This palace, called ‘Ryūgū-jō’ is built from solid crystals and red and white coral. However, stories go that he resides in the crater of a dead volcano, or more specifically, in a lake called ‘Biwa’.
Ryũjin is known for having a lot of knowledge about medicines. especially longevity ones. Sea turtles, fish, jellyfish, and snakes are seen as Ryũjins servants.

How the jellyfish lost its shell

At some point, Ryũjin got a terrible skin rash. He tasked one of his servants, a turtle, to go fetch him a monkey’s liver. The turtle went out on the land, found a monkey, and lured the monkey out to the ocean with beautiful stories. The monkey, oblivious to what was coming, followed the turtle into the ocean all the way to Ryũjins palace. A huge celebration followed, welcoming the monkey and the monkey was more than happy to be there.

Finally, a jellyfish came floating by, telling the monkey about the plans and that his liver would be taken out. The smart monkey, however, acted really sad. Not because his liver would be taken out, but because it already was taken out, by himself. He hung his liver on a tree branch to dry and totally forgot about it. The monkey would have to retrieve it, so Ryũjin could make use of it. He needed to get back to it now, as he worried the rain would render it useless.

The monkey and the jellyfish went to Ryũjin, who decided that the turtle should return to land with the monkey. When they arrived, the monkey spoke about what the jelly had told him. All the while the monkey was picking the toughest routes for the turtle to follow. The turtle did what he could, but finally lost sight of the monkey and returned to the ocean empty-handed. He told Ryũjin of the jellyfish, and that’s when the dragon god made the jellyfish lose its shell by tearing it off.

Different variations of the story

Similar stories about the god originate from India, later moved to China to finally end up in Japan. The story of the jellyfish and Ryũjin comes from Japan, but stories vary. In some stories, the monkey is actually an ape. In others, the monkey left the liver in a jar and not hanging on a branch. rarely Ryũjin is a goddess, not a god. I suspect though that that last one is faulty, as there is only one story like that. When it comes to the turtle, the story varies too. In some, the turtle doesn’t join the monkey back to land. The monkey instead disappears after the jellies message, claiming he would get back after he retrieved his liver.
Also, in some of the gentler stories, the jellyfish was ‘rid’ of its shell, while in others it’s beaten senseless by Ryũjin until it broke all its ‘bones’.

Symbolism of the story

In the old days, the unknown needed explaining. This is how many different legends came, and are still coming to be. The lessons that could be taken from this story are: Be smart like the monkey and don’t expect strangers to be kind, just because you happen to be alive, or present somewhere. Also, it might be wise not to blurt out truths as the jelly did. It might hurt you and others around you. Also, even gods are not all-knowing, but that’s just an observation from my side :p.

*Featured image by zoo_monkey on Unsplash

PrevPreviousThe life cycle of jellyfish for creatives
NextDrawing from imagination, why is it so hard?Next