Immortal jellyfish, phoenix of the ocean. 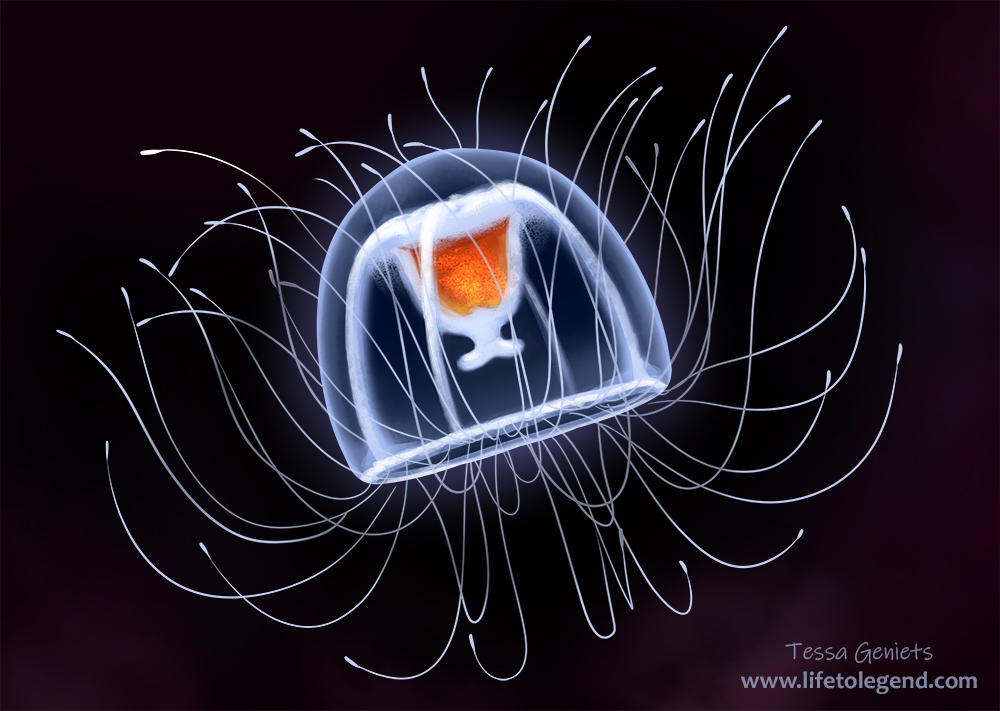 She may not look the part, but this jellyfish is the only true immortal creature on this planet we know of. Turritopsis dohrnii, also known as the 'Immortal Jellyfish' is a small jellyfish that left researchers baffled, and to this day is of great interest for those that seek longivity and immortality. Damage it, stress it, or even kill it, it still won't die.

Above all, Turritopsis dohrnii is known as the immortal jellyfish. However, this shouldn’t be taken literally. In truth, they’re biologically immortal, which means that their cells and gene sets are immortal, but not the individual itself. This makes Turritopsis dohrnii a true phoenix of the ocean, a unique species that may have the answers for longevity in humans.

Note: Are you an artist looking to implement jellyfish characteristics in your work? Read on at “Jellyfish for creatives“. Remember though that any information regarding jellyfish is key to a successful design.

Turritopsis dohrnii is one of many animal species that undergoes a major transformation throughout its life. Turritopsis dohrnii undergoes five stages, from planulae, which is a free-swimming larva, a polyp, which is stationary, all the way to adult medusa. This complex transformation takes 20 to 30 days in which the jellyfish only becomes recognizable as such in the latest stages. The remarkable thing about Turritopsis dohrnii is that in any given stage after the polyp stage, it can revert back to a polyp, so it can start the cycle all over again, but more about that later!

The planulae are the larval form of jellyfish. After the eggs are fertilized, they’re on the hunt for a suitable substrate. Larvas don’t go this road alone, after floating for a while on the water surface they will drop to the ocean bottom, they come in large groups, and settle as such as well. As soon as they find a good substrate, they will latch onto it in a group, forming a colony of polyps.
The planulae look like an oval translucent structure with tiny hairs called cilia, lining the outer layer which it uses to propel itself through the water.

As soon as the larva settles it turns into a pale orange stem with branches, which have tentacle-like branches attached to it. When you see one, there will be many more as Turritopsis dohrnii forms a large colony. This keeps growing until it turns into a budding polyp.
Note that the image to the right is just an example, each jellyfish has distinct features in all its stages, but the process is more or less the same. Turritopsis dohrnii usually develops several branches in its polyp stage.

The budding polyp is a stage in which the plant-like polyp changes shape while also detaching from the original polyp to attach themselves again to the soil next to the original polyp. It then forms segments stacked on top of each other, these round segments with tentacles are genetic copys of not only the polyp they’re on, but also that of the polyp they fell off ánd that of the planulae.
As soon as the bud, also known as a medusa bud, is fully grown and on top of the polyp, it starts to contract after which it comes loose from the polyp. This loose segment is now a jellyfish, also known as en Ephyra. Most species are somewhat star-shaped when they come loose, after which they quickly grow and turn into an adult jellyfish. These buds are formed within a week from attaching to the ocean floor.

The ephyra, or juvenile medusa is a young jellyfish of about 1 mm in diameter (0,04 in). Unlike its adult form, it has only eight tentacles at the fringe of its bell. When not eaten, it quikly turns into an adult and fertile jellyfish.

Turritopsis dohrnii has a bell-shaped body of about 4,5mm (0,18 in) in diameter. Its stomach is bright red and is cruciform shaped. When still young, its bell has eight tentacles uniformly distributed around the bell’s edge, while adult specimens have around 80 to 90 tentacles.
The dense nerve net cells are clearly visible in the epidermis (surface) of the cap and form ring-like structures.
The female jellyfish keeps her eggs in the lining of her stomach. In this stage they’re called gonades. When a male releases his sperm near the female, her eggs are released to turn into planulae.

Mesoglea
Its mesoglea, which is technically the inside structure of the bell and helps it keep its shape, is remarkably thin. This mesoglea consists of proteïnes, collagens, heparan sulfate proto glycans, which are heavily glycosylated proteins, and water. This jellyfish, just like other jellyfish, consists of only 5% solid matter, the rest is just water. Thus, its mesoglea is of utmost importance as it serves as an internal skeleton.

The phoenix of the ocean, biologically immortal jellyfish

So, what does it mean to be immortal? Well, for a jellyfish, probably not that much. It doesn’t have a (conscious) brain after all. Even worse: The jelly needs to be very uncomfortable to trigger ‘rebirth’. The bell has to be damaged, the salinity in the water needs to undergo major changes, major temperature changes, sickness and starvation are all reasons to trigger rebirth, but what is this rebirth, really?
The transformation back to a polyp or cyst state requires not only discomfort, but also two types of cells, specifically that of the bell and circulatory canal system, which a jelly only has after the polyp stage. This means that only jellyfish in medusa stage can be considered immortal.

When a jellyfish is very uncomfortable, it starts to deteriorate like you would expect any animal that’s dying to do. First the bell and the tentacles deteriorate, just to sink to the ocean floor as a blob of cells. If the jelly is a juvenile (max. of 12 tentacles) it turns into a cyst, to later turn into a polyp. But 20 to 40% of mature medusae went back in the polyp stage without passing through the cyst stage. This process is called trans-differentiation.

Trans-differentiation is the process of one cell turning into another. In the case of Turritopsis dohrnii this means that it’s bell- and tentacle cells together form a new and younger type of cell, either in the cyst stage or the polyp stage, depending on the individual. The original individual jellyfish ceased to exist, but it’s cells are still there, creating a new, younger clone of itself so it can duplicate itself many times when it reaches the polyp budding stage.
This is particularly interesting for scientists, as they hope to someday cure deceases and extend the human lifespan by creating stem-cells through trans-differentiation.

Turritopsis dohrnii is believed to originate from the pacific ocean, but now can be found nearly anywhere in tropical waters. They likely spread through trans-arctic migration and ballast water from ships.
When still polyps, they prefer sturdy soil to grown on, as adult medusae they float wherever the winds and ocean currents take them.

Jellyfish are passive brainless creatures. However, they do have typical patterns they hold on to. This is the case with Turritopsis dohrnii too. When larvae and polyps, they stay together. As adults they tend to do so as well.

Turritopsis dohrnii eats mostly plankton in its early stages. When in medusa state it’s a true carnivore, eating zooplankton, fish eggs, and mollusks. It hunts while drifting through the water, spreading out its tentacles which are flexible and can bring food to the mouth. The jellyfish catches its prey usually by accident after the prey drifted into the tentacles. These tentacles are covered with stinging cells called nematocysts.
It’s likely they use their bells as well to hunt. When prey is detected nearby, jellyfish contract their bell, which causes suction and may draw nearby prey into the tentacles.
Interesting detail: The jellyfish eats and excretes waste through the mouth.

The immortal jellyfish knows five stages in life. The initial state is gonads. These are just the unfertilized eggs, which are not considered jellyfish yet.
When fertilization takes place, the jellyfish develops as follows:

Remarkable about the immortal jellyfish is that, when sexually mature but injured or sick, it can revert back to the polyp state.

Just eating, (floating) and reproducing! Polyps of this species stay in groups, larva and adult jellies stay together in large floating groups.

The biggest enemy of this species is other jellyfish. But sea anemones, tuna, sharks, swordfish, sea turtles and penguins eat them too.

Turritopsis dohrnii is widely spread throughout the world, they are not endangered an endangered species and, other than predation, there is not much that can threaten their lives. Even when sick, injured, or dying, it can revert back to polyp state and wait for better times to develop into medusae.

There are no known subspecies of Turritopsis dohrnii, however, in different areas in the world they may vary a bit in how they look. There are also no known hybrids.

In case you didn’t come here to just brush up your knowledge about jellyfish: Make sure you check out ‘Jellyfish for creatives’ and the related articles below. They will provide you with much more information about jellyfish. Think of their life cycle, symbolism and characteristics, and how to use them in your creative hobby or business.

PrevPreviousWelcome to Life to Legend
NextThe features of the adult jellyfishNext