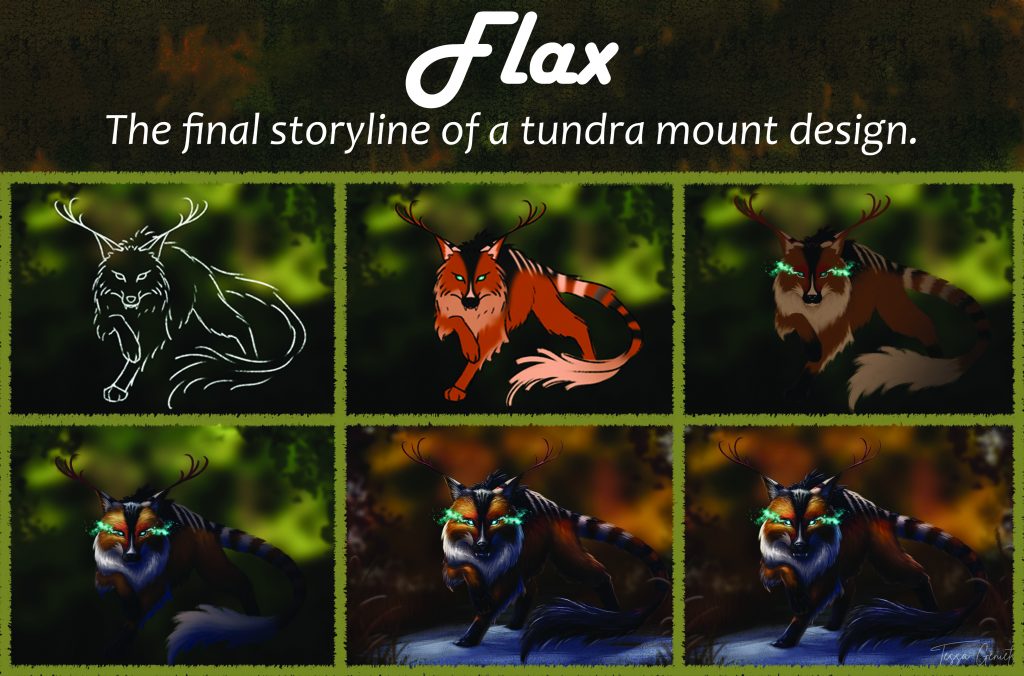 The storyline for Flax

Flax is clearly a fox. Her tail however is that of a snow panther. They are known for their extremely long tails that they can curl around themselves to stay warm. Their tails also help to balance themselves in mountainous areas, a geological feature often seen in tundra-like habitats, or even causing the habitats’ existence. The tufts on the ears and tail are ornamental, and the typical fur pattern helps to camouflage. The particular pattern on the tail comes from that of a ring-tailed lemur.

When we take Flax’s features into consideration we know that she is (probably):

We could also assume that:

Storytelling is a very important part of the process. As a concept designer, it’s not always your job to create the actual storyline, but you will at the very least have a lot of influence on the story. And in many cases, you can actually suggest ideas as well. It’s possible that you have to pitch your ideas, which is a great opportunity to add to the backstory of your creature.

Flax is of a very rare animal species called Lutherial Vixen. Vixen refers to the female, its male counterpart is never really seen. Not because they don’t exist, but because they’re extremely deadly. Nobody ever survives facing one. The accidental onlooker (usually a travel companion of the victim) might get away and report a shady fox-like creature with blue glowing eyes, a dead giveaway that they’re of the same species as the vixen. But more often than not: Whole groups of travelers, up to 20 people, can be killed by just one individual. This was determined by studying the engraved toothmarks on the bones of the victims.

The females can be just as deadly, but they instead will from time to time bond with a person, as is the case with Flax. The main character ran away from home when she heard she was bound to be married off to someone when she became of age. She would wander for weeks. As a royal family member you still learn to live the harsh life that came with living in an area like hers, so she was very capable of taking care of herself. But when she wandered off too far into the habitat of the Lutherial Vixen, which usually lives in rocky forested areas right where the boreal forest ends and seasonal forests begin, she was lucky enough to bond with a vixen, rather than being torn apart by one, or slaughtered by a male vixen.

Lutherial Vixen are not exactly from this world. They are of flesh and blood, but they communicate on a spiritual level with each other, as well as with people that are open to it. Their coat is ghostlike in wintertime, with blacks, whites, and steel greys. Combined with their glowing blue eyes, it gives them an ethereal appearance.

They communicate on a primal level, in the shape of excitement when a hunt is on, or tension when they found a trail of something dangerous. These feelings are funneled spiritually right to their nearby members or the person they bonded to. In the last case, they will learn to understand human emotions and anticipate them. They also learn to form words in the shape of emotions that are connected to these words. This is more of an associative ability.

Lutherial Vixen can shift in and out of our world. When they hide in shadows they seem to lose their solidity at will, which makes them near-impossible to hunt down. Because of their spiritual abilities, it’s also impossible to stalk them. To catch one, your best bet is to corner one in broad daylight and hope you can kill her before she kills you and anyone that came with you.

The chance a Lutherial Vixen will bond with you is really slim. From what it seems is that the females are aware of the relative intelligence of humans and will use their spiritual capabilities to make the hunt more interesting. Humans are easy prey for Vixen, and Vixen are intelligent creatures. It seems like people are a fun break for them because they provide a whole different kind of hunt: A mental one.
Humans that deal with the female Vixen speak of feeling haunted, afraid, dreadful, but also extremely cheerful from time to time. Similar to that of a bi-polar disorder. People will go mad after some time of being stalked by a Vixen. This can take up to two weeks, that is, if the person knows to survive that long in an area like that with that mental state.

Vixen only bond with people that become aware of her and her games. However, most will perish and become yet another meal before they do so. Some people are aware of another entity in their heads right away. These are usually very level-headed people that are very well connected with their body and environment. Others become aware after some time, usually by coincidence when they’re trying to analyze their mental states, or are aware of the presence of Vixen in the area. These people however cannot connect with Vixen on a spiritual level. They will be killed soon after they become aware.

All evidence is pointing to Vixen bonding with people that are aware of them ánd can communicate with them. The bonding seems to happen more out of curiosity than anything else. After some time the Vixen will become fond of the person she bonded with and evolve into a mount or companion like no other.