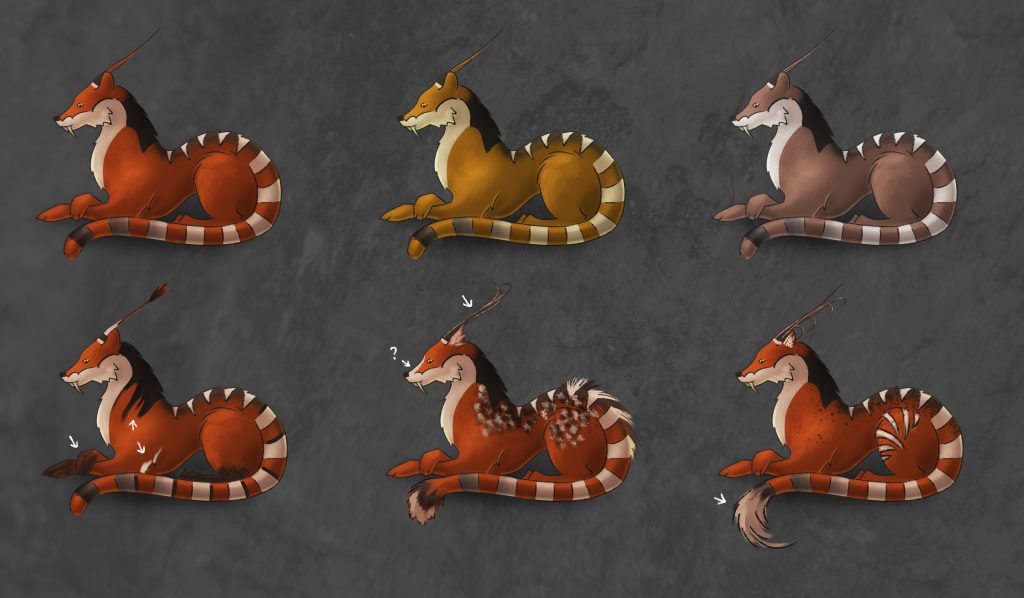 Concept art has many facets. One of the most important ones is storytelling. Your concept could just be of a generic creature someone could get across, but won't think more of. Or a leading one, like Flax, a prominent mount in the storyline. Both types have a clear overlap in how you should approach them. Habitat should be taken into account as well as functional anatomy based on their habitat and behavior. But there is way more to a character or creature that has a prominent place in a story. And Flax, a Lutherial Vixen is a good example of that.

This article is part of a series, part 1, part 2, and part 3 should be read first.

Building a creature from scratch

In the case of Flax, little was known beforehand. It was supposed to be a mount that could survive in a sub-zero climate with harsh winds and short summers. It also had to look like something that was still somewhat from this world. So no mushroom-based bog creatures, full-blown Cthulu’s, or aliens. It had to look remarkable, but how it should be remarkable was unclear. What I did know though was that the mount would be used by a young royal family member.

To me it made the most sense to draw something elegant and/or playful, however, we were talking about really hardy people. Think of our Vikings, you won’t see them ride nimble and elegant creatures. It makes more sense to have sturdy mounts. But because I didn’t know anything about their culture other than their location, I was left ‘in the cold’ as to where to go next.

The purpose of concept art

You may be thinking: Hey, that’s a shitty move, you can do way too much with that! Well yea my friend, but that’s what concept art is all about! We come up with ideas. Sometimes there is already a very clear idea about what a mount should look like, but most of the time there is not. And sometimes there may be, but your client wants to poke your brain for ideas because you’re the concept artist after all.

In this case, very little was known. There wasn’t even a clear concept of the character that would be riding this mount, and the storyline wasn’t that developed yet. Mind you: As a concept artist, you might be coming up with ideas for a mount that will become a major storyline within a story, or will greatly affect the behavior or future of the character that is tied to the mount you designed. As was the case with Flax.

As you can see: My designs were all over the place. Sturdy mounts, playful doggo’s elegant designs, and also a few designs of creatures that were tapping into the fantasy realm. Right off the bat, it was clear that 3 designs (number 3, 5, and 7) wouldn’t fit in.

The design of number 3 simply didn’t work, its shapes too bulky, while the head was too refined. It might have been an interesting design under different circumstances, but not this one. It simply didn’t have the appeal or interest they were looking for.

Design number 5 had some interesting features. With the shaggy look of a weathered tundra creature, the energy of a young animal, you could easily imagine a child racing around and having fun, free of the fears she will have when she grows up. However, the design was still too simple, it could just be an old wolf with a bitten-off tail and an underbite. Also: The character turned out to be in her late teens or early twenties. A playful puppy-type mount didn’t fit.

Number 7 had an interesting design, based on rodents that live on the tundra, like lemmings. They exhibit oranges, whites, and blacks. The white patterns I used come from tobiano horses. However, this particular design didn’t fit the character it was meant for. If anything: This one would be a better mount used in an army. The sails on the head and tail could perfectly work as a threatening signal. Another use this one could have was to be a mount for a young naughty boy that had a habit of getting into trouble where the brave mount would always save him.

Narrowing down to what became Flax

This leaves us with designs 1, 2, 4, 7, and 8. A combination of logical thinking and taste was the next step to take. It was clear already that the character was around 20 years old, a royalty, a princess, or the first daughter of a baron. A person of great value to the family simply because she could be married off, something she wasn’t ready for. She is rebellious in nature but also wanted the best for her family, which meant that she constantly had to walk a fine line between her needs and that of her family.

Number one was quickly decided that it would be more fitting for a lord. A mount that’s not too agile, or quick, but does force respect because of its strength and bulk. It would work for a warrior-type lady as well, but that is not what this woman was.

The 4th was ruled out as well because of its bulk but will be used instead by mountain tribes because of the potential strength and agility this creature could have.

Number eight was a winner, however, it was eliminated because it looked too much like other fairly popular mounts in games and movies. Although the design was good, it wasn’t unique enough.

This leaves us with no.2 and 6. We already know that 6 was the winner, but two was a close call. They landed on 6 because they were looking for a mount one could really bond with. Number 6 looked more intelligent than number two does. This was something they didn’t know beforehand, but decided was the best route to go.

Flax is what the mount was called. We could have made major changes, like giving her hooves, or the color pattern of number 2. But decided to stick with the original design because it already fit the vision fairly well. So instead I came up with a bunch of alternative designs for the summer coat, as that would be the most spectacular of the two. In her winter coat, she would replace the browns for whites and the blacks would partially turn into a steel grey.

We tried some different colors, patterns, and slight design changes but kept landing on the red fox type, but with a bit more interesting pattern (darker back and more color variation on the head) and a different tail and ear tufts. She would also have to be more furry, just for the fancy factor.

As Flax was picked, a story evolved around her. Finally, there was a solid idea for this mount, and this brought more information to the storyline, the main character, and the actual mount. This would lead to the development of history between the two, overall information about Lutherial Vixen, and provide interesting features for the storyline to come.