The benefits of doing art prompts 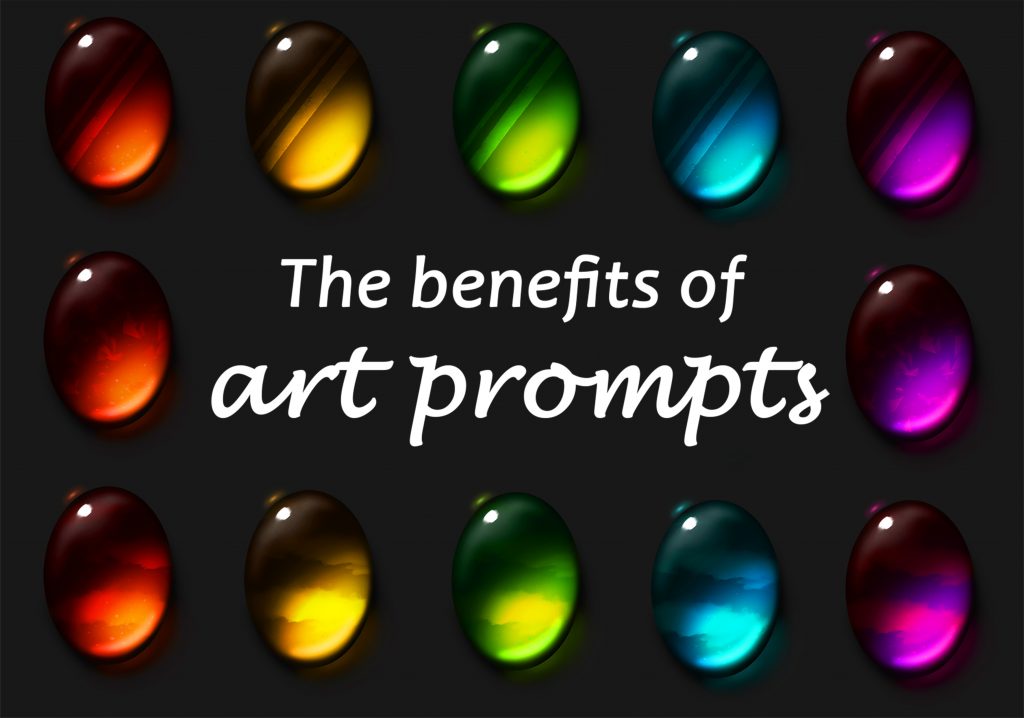 You see them everywhere! They were a thing long before Inktober and still are a thing today. In fact: There are so many channels providing art prompts that artists can make their day jobs out of it! If only it would pay, right... The reason it's such a 'thing' is that it works. It works very well even. And its does for many reasons. So what are prompts, why are they so effective, and where can you find them?

What are art prompts

Art prompts, really simply put are a word or a sentence describing something. This something can be a solid thing, like Gemstone. Or a rough description open to interpretation like: I saw something hiding away in the bushes the other day and since it didn’t leave my mind. It had reflective green-ish big cute eyes, The teeth however looked menacing, were scared of me, and were hiding away, but I could see it had very colorful fur or feathers. It ran away before I could get a good look at it.

Gemstones are obviously something people tend to wear. It’s not as simple as ‘it’s a pretty stone’ no. Pearls for example are also considered to be gemstones. But it’s not hard to understand the prompt and actually do something with it. Prompts can be specified even further. In this case for example Ruby, pearl, diamond, opal etc. No matter the case, these prompts are very straightforward. They allow you some artistic freedom, but not that much.

The other kind of prompt however is a different case. It’s really open to interpretation. Where the first comes to art techniques mostly, second requires a lot of knowledge as well. When you start doing this kind of prompt: Make sure you know what you’re doing, or it’s something you really want to practice, because you will be disappointed with your work otherwise.

As we’re explaining what prompts are, let’s dive a tiny bit deeper into the last one so you can grasp the goal a bit better.
The prompt:
I saw something hiding away in the bushes the other day and since it didn’t leave my mind. It had reflective green-ish big cute eyes, The teeth however looked menacing, were scared of me, and were hiding away, but I could see it had very colorful fur or feathers. It ran away before I could get a good look at it.

Although it seems a small sentence, we can draw a few facts from this that will help you successfully tackle a prompt like this because the point is not to only draw something colorful, cute eyes, and scary teeth. The point is to make something cohesive, read between the lines, and make sure that, whatever you draw, makes sense.

As you can see, prompts like these are a lot more complex. If the subject interests you, or you wanna give it a try, you shouldn’t hesitate to do so. If it’s a subject you are very interested in, it’s absolutely worth it working on them. Just make sure to always have a list of conclusions you can draw your inspiration from, analyze whether your idea makes sense, and work from there.

Why are art prompts so effective

Prompts are extremely useful for many reasons. No matter your skill level: They will almost always improve your art and your artistic mind. Even when a prompt is too simple for you: You can challenge yourself by instead of drawing a ruby: Draw a ruby figurine. Or a ruby creature. There is no excuse not to do prompts. especially when you like doing them.

Where can I find art promps

There are plenty of places where you can find prompts. Google them and you’re stoned to death with them. Look up nearly any Facebook group, especially the ones that are starting off, and you’ll see that many have art prompts. Life to Legend has two solutions for the needs of prompts: Our creature prompt generator and monthly prompts consisting out of several prompts in the Facebook group. There are also a lot of different global art prompts:

There are waaayyy more out there. Some months have more than one kind of challenge, others have just one, or one that’s not that popular (the ones listed above are quite well known). So that’s a bunch of sources for you!

The benefits of doing art prompts at a community

There is something to say for communities: It’s extremely scary to share your art for one. But to learn it’s very beneficial to do so. Life to Legend Facebook group is no exception to that. There are way more groups that are very suitable to learn from. The most important things for you to do are to 1: Find a group that’s about a subject you love. And 2: That it’s a healthy, well-managed group where people are expected to be kind to each other, but also have the freedom to give constructive feedback, even if it isn’t all positive.

The most important thing for you to do is to actually post your art, ask for feedback and voice your concerns. When people give feedback, be open to what they’re saying, thank them, even if you don’t agree, and if things aren’t clear, make sure you ask questions.

Life to legend focuses on creature designs, surrealistic character designs, and animals (because the last is such a broad subject and very important for creature and character design to understand the world around us very well). I mentioned the creature design generator before, which speaks for itself. However, at the Facebook group, we have a bit different approach to the prompts than most channels have. This is because we firmly believe that a solid understanding of art fundamentals is key to good art. And these fundamentals reflect best in a myriad of subject-related prompts, ending with a full-blown creature or character design.

What we do is: We pick a subject, say: fire. That’s the prompt of that specific month. This subject is then dissected in many different subjects. Think of: Lava, magma, candlelight, campfire, ember, fire spark, fire explosion, etc. All these kinds of fire have different properties. Each of them is a challenge to draw but isn’t a full-blown prompt that will take you hours or even days to finish. Instead, you spend a few hours each to learn more about this prompt.

By the end of the month, you can opt-in for a feature on our Instagram page (Not live yet, it won’t be until we have at least 15 consistent participants each month) by posting a fully rendered creature- or character design based on the given prompt and its elements. Like this everybody has the time to learn about, and understand the given prompt, and give it a good try drawing something related to this prompt combined with a creature or character design. All while receiving feedback from group members.

This way everybody has the time to learn more about the subject, receive feedback on their art, a subject everybody is focussing on, and have some social media exposure on the go. And the best thing is: You can decide yourself how many sub-prompts you do and when you do them before participating in the creature or character design!

No matter if you are new to art, or a true veteran: Art prompts are very valuable. They can give you a little break from mandatory commissions or daily life, or they can teach you more than you imagined they could. There is no ‘must do’. If you’re too busy, that’s all fine. But when you do join, you will gain a lot of practice and knowledge, ánd when the IG page is up additional exposure, that is of course if you decide to do the LtL prompts and post accordingly.

Each group and initiative has its own rules. Find what suits you best and interests you most, and you’re good to go!