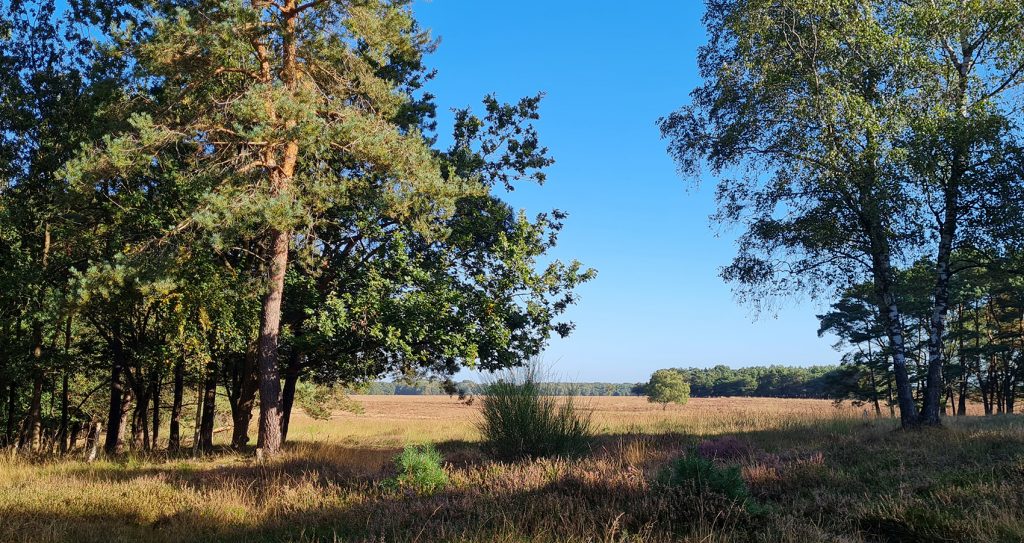 Creating a world for characters and creatures sounds easier than it is. Each habitat comes with its own challenges and abundances. This is the sole reason why there is so much variety of species these days, including animals (and humans), plants, and anything in-between. In turn, they change the environment, creating a delicate balance between demand and availability. Heathlands are usually fairly dry and sandy habitats that depend on animals for their existence.

Creating a fictional world for characters and creatures, why is it so important?

(This paragraph is recurring among the series, you can skip this part if you read another part of the series already.)
Creating a fictional world for characters and creatures (from now on referred to as creatures) is equal to knowing your creature. Most of the time a creature is subject to a world and/or habitat. It’s rarely the other way around. So it needs to be able to function in a way that makes sense in that world or habitat. In this series, we will analyze habitats of planet earth and run through the different animal species and their specializations specifically for that kind of habitat.

We will also look at how people live, or used to live in these habitats, living from the lands as primarily hunter-foragers. In other words: What skills would a person need to have to live in, or travel through a landscape like this throughout the seasons.

Before you continue you might want to read the following articles first:

Heathlands are usually fairly dry, well-drained (somewhat) acidic habitats with little nutrients in the soil. Because of that, only specific plants grow there. Think of heather. different kinds of stocky grass, like heath, the grass the heathlands thank their name to, and low shrubberies like gorse and bilberry. Other plants that grow in heathlands are Juniper, different kinds of fir trees, and many different kinds of mosses. Herbs on the other hand are rarely found here. Seasonal plants and trees are sometimes seen in heathlands like the birch, but they are an exception to the rule or are somewhere near a forest edge. The exact species may differ per country, but if you’re a writer or an artist, it’s enough for you to know that these plants do well on dry soils with little nutrients.

They are a thing. The only natural heathlands are high up the mountains where trees have trouble growing or are near the coast where the wind always blasts the land and high salt content prevents trees from growing. All the other ones are artificial. They are made many years ago by farmers who cut down all the trees and let farm animals roam these open lands. Some of these farm animals would eat the young trees, while others would trample them.

Because of the consistent grazing and the lack of fertilization of the ground back in the days, these lands were depleted of nutrients. It literally turned into a cold sandy desert in some places. Sometimes even creating drifting dunes. Because no crops would grow on this kind of soil and the low nutrient content of the available grass and shrubs, these lands were abandoned.

Plants however would grow back, but they were of a specific kind like found in mountainous heathlands, and/or near the coast. This, in turn, attracted wild animal species that preferred open landscapes and were adapted to that kind of habitat. But left on its own, the heathlands would be quickly overgrown with trees. The only reason these heathlands still exist is because of human interference and preservation with the help of grazing animals. This is because of its unique beauty and creatures. All and all, this type of heathland would serve as a wonderful backstory for creating a fictional world for your creatures and characters.

Natural heathlands could be seen as a border between two very different kinds of habitat and/or climate. Dry heathlands require very specific conditions:

Trees, and especially seasonal trees, are a huge source of nutrients. They lose their seeds, flowers, and leaves throughout the year, leaving a blanket of rotting organic matter. This organic matter, together with dead animals, is what turns sand into soil, white sand into brown soil. This soil is compact and can hold water much better, allowing organic matter to rot even faster, returning the nutrients back to the soil with the help of microorganisms and fungi. If seasonal trees were to grow where heathland is, there wouldn’t be heathland for much longer.

This is the very reason why heathlands do so well in areas where trees don’t grow. Areas that are too high in altitude and too salty or windy to sustain trees, and especially seasonal trees.

Relatively few plants can survive in dry heathlands. The nutrient-poor and dry soil contribute heavily to that. If your story plays, or your creature lives in a habitat like this, it’s very important to understand the mechanics behind the habitat because it’s very telling for its location and the organisms that live in it. If you work in a fictional world, this kind of landscape can give your story or illustration a really unique vibe. Expect to find heather, pine trees, the occasional birch or oak tree, bilberry, gorse, bracken, and different kinds of stocky grass.

Animals living in the heathlands are often specialized animals. Especially when they’re smaller creatures or insects that don’t cover great distances. But many bigger animals make heathlands their homes as well. However, more often than not, these larger animals tend to travel between the heathlands and bordering forests to feed on whatever they need. The same counts for birds. Think of different deer species, alpine ibex, bovines, (wild) horses, rabbits mice, rats, snakes, lizards, a broad variety of insects and foraging birds, and any predator hunting these animals and comfortable with open landscapes. You can think of wolves, bears, foxes, felines, and predatory birds.

Where to go to find creatures living in specific heathland habitats?

Every heathland area has its own set of animal species that live there. In the mountains, you can expect animal species that are great at climbing. Man-made heathlands are usually grazed by sheep and half-wild bovines. To the coast, you can also expect to find creatures that spend part of their lives in the water.

Because dry heathlands are a rough description of specific soil (or the lack thereof) and plants and can occur anywhere near the coast, high in the mountains, or man-made areas, it’s very hard to give a clear list of animals you could be inspired by. But there are some regions you could use for inspiration that include heathlands instead.

As you can tell by now: Heathlands are a broad concept and dispersed all over the world. This means that cultures will partially decide how people lived, or still live in these areas. However, these lands do have some similarities: They are unforgiving, poor in nutrients, dry, and coarse. The ground largely consists out of sand or rocks.

Crops will barely grow, the land can’t really be worked, and keeping large herds of animals on small patches of land is not possible. Finding food as a gatherer is not impossible, but is time-consuming. If you know where to go you might be able to find a variety of berries and seeds, but fruits you won’t find there, and herbs are unlikely to be found as well, depending on the area. If you own a large patch of land, you could keep large cattle like horses and bovines, but if you don’t you’d have to do with chickens, goats, and sheep, or you’d have to resign to hunting or fishing if you’re near a coast.

Traveling through heathlands for long periods of time would require you to prepare properly. Water is usually scarce, or salty. So you would need to pack a lot of water or know how to collect it from the air. In terms of food, you might be able to forage for some on the way. If you’re near a coast, fishing and foraging for sea fruits might be a nice option. If you’re not: Hunting is a preferred skill. Traveling heavily with stored foods is another option.

If your character or creature needs to travel these lands, it might be hard to do with a cart or a regular car because it’s either very rocky (and sometimes steep) or very sandy. Riding an animal, having specialized transport like dirtbikes, or the ability to hover or fly over it, would be your best bet. Unless there are well-traveled (hardened) paths available, you don’t want to have a regular vehicle, wagon, or sled being driven, pulled, or pushed. They will get damaged or get stuck at some point.

PrevPreviousLeading artists on art fundamentals (Video tutorials)
NextInktobers tricky business, alternatives, and what you can and cannot doNext