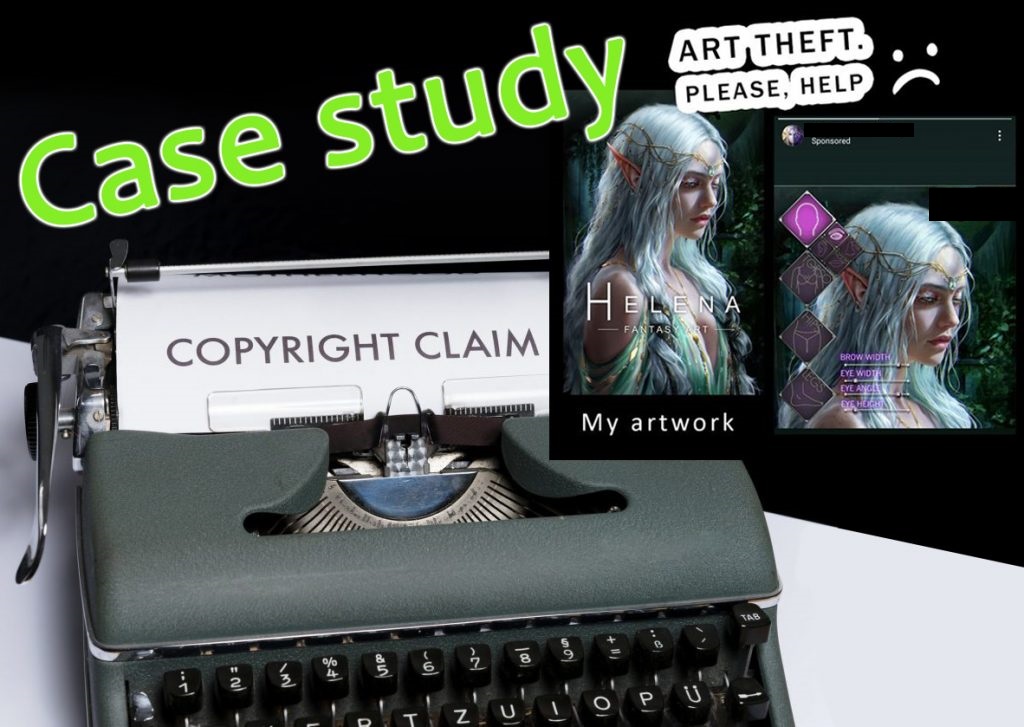 Sooner or later this will happen to all of us. Your art will be stolen for one or another reason and you’re left at the sideline wondering how you are gonna solve this copyright infringement. Sadly, there is very little protection for artists, and the digital age makes theft a lot easier. In this article, we take you on a ride with Helena Fantasy Art, who had one of her masterpieces called ‘Lady Elluna’ taken from her by a Chinese company for a 3D game.

Your art stolen by an innocent teenager is annoying enough. But imagine a big company that makes a lot of money from their games, that just slaps their own game UI and logo on top of it. This is what happened to Helena Fantasy art. Helena was so kind to share with us what happened and what steps she took to resolve the issue. The following case is copyright infringement at its worst.

How did Helena find out about the copyright infringement?

It was January 2021. Helena is quite well known in the art industry and even more so in some specific Facebook groups. She makes wallpapers and posters of fantasy-based characters for personal use only. So, when her art was stolen, she was quick to be notified by her fans. Her images were used in advertisements on Facebook, and Instagram for a 3D based game from China.

So, what did the company do?

Not only did they take, and modify Helena’s art without permission. They slapped on their game UI and their own logo and put up advertisements throughout Facebook and Instagram.
Even more so, these advertisements also made potential buyers think that Helena’s art was one of their playable characters that could be modified from top to bottom. So the company did not only steal art and pretend it was theirs but they clearly don’t mind selling a nonexistent character to their audience. They draw their customers in with a character that doesn’t even exist in a 3D world, let alone their game.

Note that its a game made for Android and iOS, with over a million installations and very high ratings on Google Play alone. They get a lot of revenue throughout their always available In-App-Purchases. The company has more games as well. They are part of the App Store and Google Play, so they know the rules by which to play.

Know that art-lovers or actual artists combined with internet can be powerful! When it comes to theft of something costs a lot of passion and hours to create, (Helena’s artworks can take up to 60 hours to make), things can go really fast. Helena put out a cry for help on social media as there is no clear cut way for artists to handle a situation like this. And before long, there was a quite clear lay of the land. Some noteworthy comments were:

Every approach has it’s pro’s and cons, a lawyer is expensive, and even when it’s a clear-cut case, you may not win it for one reason or another. But you need a whole lot of money laying around to be able to take action this way. However, getting legal advice can help you out a lot. Don’t hesitate to drop the ‘lawsuit’ bomb, they don’t know if you have the money or not. Other legal routes via Google, Facebook, etc. are very useful steps to take as well.

Handling a copyright infringement by a company

Helena was so kind to keep everyone up to date about the steps she took and what the results were. And she gracefully elaborated on the topic through private chat in an effort to inform people, and maybe put a dent into this kind of malpractice. It also made me able to present to you this case study, including the art, and significantly helped me write about copyright infringements before.

After doing her research about what routes she could take, Helena decided to take the direct route. She found the company’s business e-mail address and sent them an email, and politely explaining the situation, stating they’re committing a copyright infringement. She asked them to take down anything with her art on it before a specified date. If they wouldn’t, she would look into taking legal action.

You may think by now that no reply would come, but one did come. They apologized for the misunderstanding and told Helena that they legally got it through Shutterstock and would look into it. However, she never put her art on Shutterstock, nor did anyone else. But she decided to give them the benefit of doubt and asked for a link.
This is where the Head of Business Development came in. She instead told Helena that her art came from an open-source website. Helena found that it had a differently cropped version of her art piece, one they couldn’t have used for the advertisement.

The company clearly wanted the situation out of the world and offered her a reimbursement fit for the hours she spent on the work, and as the solution could have proven to be a lot more problematic, she accepted the reimbursement, only to have the Head of Business Development ask her to confirm that they now had bought the rights for using her art in their ads.

If you get in a situation like this, expect companies who steal your art, to try and take as much advantage from you as they can. They probably spent quite some money on creating the ads. They tend to pay big. When problems arise, Facebook tends to look at disputes like these on a case-by-case basis. There are no financial reprecussions for companies who do things like this, however, if this happens frequently, they may be banned from making ad campaings from their account. Sometimes companies even get banned from the platform altogether, losing all their followers on Facebook with it. Having to take down such campaigns, and being flagged by Facebook is very painful for the company. But! Don’t let that stop you from making them stop using your art. They should never have done that to begin with.

That being said, Helena never intended to sell them the copyrights, so when she was asked to confirm that they had bought the rights, she was first caught off guard, but after re-reading the e-mails, she found she never gave any such permission. Helena then replied with the message that she took their payment as an apology and that they didn’t have permission to use her artwork in past, present, or future. On which they replied: “Sure, we won’t use it in the future. Just wanted to confirm that you have no further complaints”.

Note how they said “Sure, we won’t use it in the future’… But there were still advertisements out there, displaying Helena’s artwork. Advertisements made before the correspondence.
Helena could find this out by following the next steps:

It’s good to note that ads that are running on Facebook, are also displayed on Instagram, as they are one and the same company. A company thus doesn’t need to have an Instagram account to have their ads out there as well. So you only have to [file a dispute on Facebook] to have that ad taken down on both platforms.

Helena then went back to the company, asking them to take down the old ads as well. Their answer was that their advertisements were controlled by other partners and couldn’t take them down for that reason. But they would contact them and await their replies.

To speed up the process, Helena went to the copyright notice form page of Facebook, and effectively took down all the ads containing her art within two days.
It’s not recommended to sit and wait until a company gets back to you in this stage. If you can take action yourself, it’s recommended you do so.
In the end, Helena both got reimbursed ánd managed to take down anything containing her art, which is a huge accomplishment for an independent artist.

A huge thanks to Helena Fantasy Art for fighting for her rights as an artist, documenting her case so well, and allowing LtL to use her art and story to educate anyone unfortunate enough to end up in a situation like this.
If you’d like to follow her, do so on Facebook.
You can buy digital files and physical prints of her wonderful works at Artstation.

How to protect your art from plagiarism and copyright infringements

I wrote several articles that will help you out on that subject. It’s not foolproof and sadly, it never will be, but it will stop most people from stealing your art. Another benefit is that, if someone ever claims it to be theirs, you stand strong in proving otherwise.

If you are in a situation like this, make sure to read the main article on the subject! It holds some amazing tips and tricks on how to protect yourself from something like this happening to you, and it also gives clear directions on what to do when your art does get stolen.