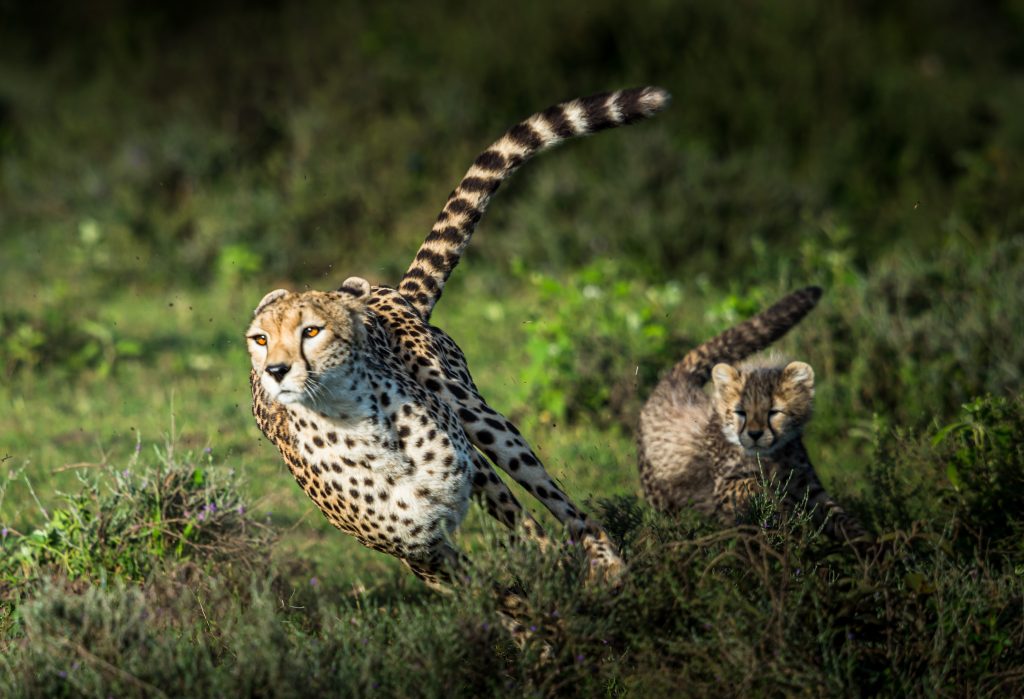 Animal locomotion slow-motion videos are technically videos that are slowed down with special equipment. Sometimes this can be done with editing after the fact only. But the best results you get with equipment specifically made for shooting slow-motion videos. Either way, this approach of studying locomotion is extremely useful.
It’s one thing to select a still of a video. It’s another to select the perfect one. Selecting the perfect in-motion pose is hard, especially when you can’t really see what’s going on, let alone determine what frame suits best as a reference for your art. Having slow-motion videos at your disposal means you can analyze the movement more easily and pick out a nice pose. Another advantage is that most slow-motion videos are either HD, or are made of HD video material, allowing for a (relatively) high-quality still.

Slowing down a normal video

Depending on what service you use, you might be able to slow down the video of your liking with the settings. Youtube for example allows you to slow down videos 4x to 25% of the original speed. If the video is of low quality you may not get the best results, but maybe it’s enough for you. Try and pick HD videos so there will be less quality loss during a still. I recommend you only use low-quality videos if you can’t find high-quality ones from the animal of your liking. In any other case, I recommend you seek out videos that are already slow motion.

Locomotion is another word for ‘the way mobile organism moves. Strictly seen we’re talking about animals moving from point A to point B in a rhythmic way. This can be walking or running, swimming, gliding, and flying. The goal of studying locomotion is to understand better the way an animal moves, and its anatomy. But, because most of us reading this are character and/or creature designers, I didn’t only include A to B locomotion videos. Many of them show animals undertaking interesting actions in really nice poses. In other words: This post doesn’t only cover locomotion, but also other kinds of movement made by animals.

A wonderful compilation with a myriad of different animal species. This is a perfect slow-motion action video to get your artistic juices running! In this video, there are some locomotion elements, but most of it is action-based scenes.

Wildlife in its purest form is in my opinion usually the best reference material. Yes, higher-quality videos can be made in a studio. but nothing beats nature when it comes to behavioral patterns. It’s not specifically what we’re looking for when it comes to locomotion, but in nature, you will see things that simply can’t be staged in a studio. Have fun watching this one!

The Slow Mo guys film all kinds of things. From breaking glass with sound or blunt force to explosions and ink drops in water. It’s absolutely worth checking them out. In this video, they decided to film a bird of prey. And they captured it absolutely beautifully.

Housecat in slow motion – Filmed with a special slow-motion camera

Another one from the Slow Mo Guys. This time their pet cat! We all know they’re very agile, but now you can exactly see just how agile they really are. This cat specifically is very well kept, so his muscles are showing wonderfully at times under his fur. Watch how a cat finds its balance in mid-air, and how it powers its way up in the sky while hunting ‘prey’. Let this beautiful kitty mesmerize you!

Ever wondered about size differences and what effect that has on the way the animal moves? If not, I think that you do now. But don’t worry! You don’t have to marvel for long! Allow these two cats to display to you the difference between a big powerhouse and a cute but deadly fluffball.

Moths are not the most popular animals on our planet. For one because we rarely see them, but also because most of them have relatively dull colors compared to their daytime cousins. But nothing is less true. If only you know where and when to look, you will see that even the dull moths are really beautiful and that some moths are actually really colorful and true eye-catchers.

I have a weakness for these fellows. They’re so diverse and inspirational! They defy all rules we know regarding shapes and anatomy and manage to make it work in their own tiny worlds. Most of these species specialized in camouflage, so if you’re working on a creature or character design that uses camouflage: You should really research these little fellows! The big plus of this video is that the host explains how they can jump the way they do.

All packed in a little over 2 minutes. This may not be your best bet for the ‘perfect’ frame, but it surely will give you inspiration and help you on your way.

One of the most beautiful videos of a hawk in flight. This video serves as a perfect reference for nearly any bird of prey. Considering you know their individual differences. Believe it or not, but this is a relatively old slow-motion video. It works as well as it does mostly because it’s shot in a studio combined with target training. Just marvel away while looking at this beauty!

Insects in flight – Filmed with a special slow motion camera

If you are a creature or character designer: What better place to look for inspiration than in the world we don’t really see all that well? I had a blast watching some of these seemingly graceful animals just flailing in the air for balance. But they still make it work!

The cheetah is the fastest terrestrial animal, only some birds, insects and fish could beat this animal in speed. Cheetahs are wonderful creations of mother nature. Specializing in speed it had to let go of some typical cat traits, like the ability to retract its nails. But everything about this animal is so incredibly special. Just watch and learn!

Yes, we are animals too, hence character and creature design are so closely related. It may be hard sometimes to find the reference material you need. Instead of looking for ‘locomotions’ in humans, you may want to be a bit more specific. The one below is ‘Human Slow Motion Run’ for example. But be creative, also in your research! Try keywords like Dance, running, jumping, martial arts, and so on. And remember that you can always slow down videos in services like Youtube. You should be perfectly fine doing so if your understanding of anatomy is decent.